Good news everyone! My days of toil and suffering have paid off handsomely, and my first written work as a freelancer has been published! WOOHOO! It is available currently on DrivethruRPG. Now that it’s released, I can talk a little bit about what I was actually working on. Months ago, I responded to an open call for writers that I found while trolling the forums of RPGNet. Soon after I signed a contract to adapt a short story by Menagerie Press’s artistic director, and thus, the Masks of Tzanti was created.

It’s supposed to be a full-on sword-and-sorcery adventure, complete with cultists, murderous barbarians, and skeezy rogues. I haven’t actually read much Robert E. Howard, but I like lots of other writers that are considered imitators, or part of the same family (Jack Vance, Gene Wolfe, Michael Moorcock). It took me about two months of solid writing to complete, although I took occasional breaks from writing due to my intense work schedule. Here is the cover art, by the very talented Steven Catizone (who does all of Menagerie’s illustrations) – 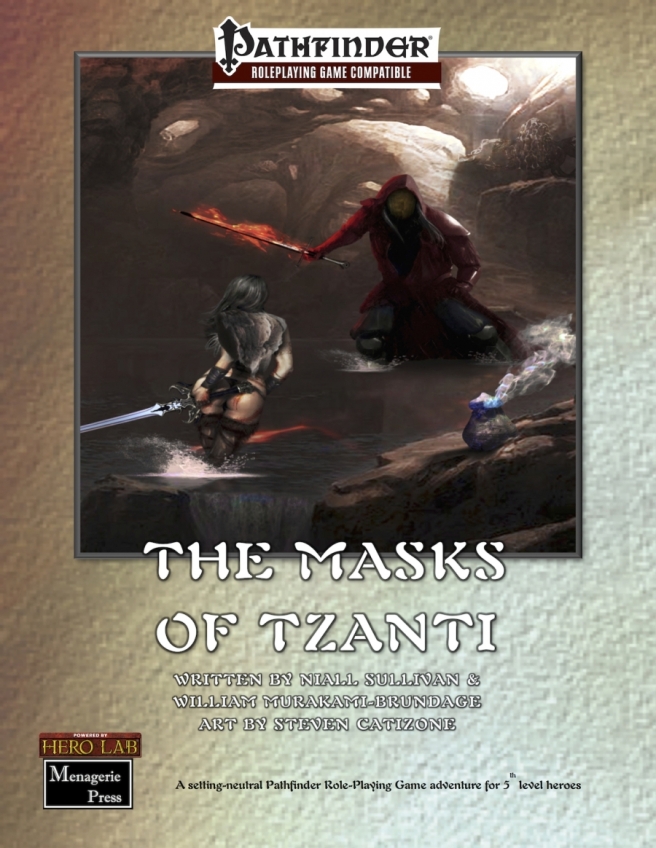 It’s a happy day indeed, and I hope friends, family, and the very few followers I have will spread the word (among RPG players at least). I will likely be working with Menagerie Press again in the future, as they are a young company looking to expand their list of products. I am also writing a conversion to 5th edition D&D for this adventure, so you can look for that in the next few months or so.

(Here are a few notes on RPG’s and D&D for the uninitiated. I wrote the story for the Pathfinder RPG. This is continuation of the 3rd edition of Dungeons & Dragons, published in 2000. When the 4th edition of the rules was released in 2007, it split the gaming community, and a lot of people rallied behind the company Paizo Publishing, who continued to release products for the game that used a modified version of the old rules (this was called the Pathfinder RPG). The company that owns D&D, Wizards of the Coast, recently published the 5th edition of the rules, in the hopes that they would unite the community again. I prefer Pathfinder to 4th edition, but I prefer 5th ed to Pathfinder. The rules are fun, and a lot more streamlined and easy. Wizards recently opened an online marketplace for PDF products called Dungeon Master’s Guild, and it’s really taking off. People can now write and sell their own 5th ed material under an open-gaming license. It was my idea to write “Masks” in 5th edition rules, since I think it’s just the right time. I may continue to do so if I write more stuff for Menagerie Press.)

So, what’s next for me you might ask? Well, if you’ve read any of my other posts on the blog, you know that I’m a big fan of interactive fiction games. One of the companies that remains consistently popular with that genre is Choice of Games, and I’m thinking that I should try my hand at penning some IF. I’ve dabbled in it before, and I got a good ways into a storynexus game about the Byzantine Empire. But this would be a bigger project, roughly the length of a short novel. To prepare, I’ve been devouring Choicescript games by the bundle, including Choice of Robots and Hollywood Visionary, both excellent stories in their own right. I don’t want to share too many of my ideas just yet, as I have a tendency to spew out thoughts and then not use them, or get bored with them. Once I get a bit more done, I’ll drop some details.

In the snippets of free time I’ve had (and March has provided more than usual) I’ve been enjoying some media that I wanted to gush about briefly. First is an excellent fantasy novel that needs to get more attention –

This is the first novel by Seth Dickinson, and it brought me low with it’s sheer awesomeness. It’s about a girl from an isolated island community, living in a fairly traditional way. Then they get colonized by a powerful empire that controls the world through cunning, ruthless diplomacy and economic superiority (aptly named the Masquerade). She grows up in their schools, learns their twisted philosophy, and becomes a bureaucratic prodigy. She is then sent to the rebellious province of Aurdwynn to bring it under heel as the Imperial Accountant. Most of the story takes place there, and concerns the unraveling of conspiracies among the nobility of a strange and foreign people. The main character Baru Cormorant of course has many divided loyalties, and she has to lie to nearly everyone she encounters (especially herself). You wouldn’t think that a story about an accountant could be so totally riveting, but I couldn’t put this book down. I blasted through it, and I’m normally a pretty slow reader. It had excellent pacing, interesting mysteries and intrigue, and incredibly well-drawn characters. I really felt for Baru, and when she got hurt (and she gets hurt a lot), I cringed as I compulsively turned each page. Read this book if you find any of the following interesting –

Seth Dickinson has a blog, and he wrote some really cool stuff about his design process for the book. It’s clear that he’s an intelligent guy who puts a lot of thought into his work. This post in particular is great, although it may spoil some things about the story. I also feel the need to mention that even though I compared Dickinson to G.R.R. Martin, there is one important difference. Seth doesn’t go for blood, guts, and sexual violence. I found this a relief honestly, as I’m no great fan of gruesome depictions of the latter myself. He explains it a bit more in that post, and my feelings on the subject are basically the same. It’s important, it needs to be acknowledged, but in fiction (especially fantasy) there’s no need to be gratuitous about it.

Anyway, check it out! And check out the thing I wrote! Until the next time when I have time and enough coffee!

A couple of years ago I was hired by a company to write some material based on the Pathfinder RPG. Today I’m going to share what it was like to be working under a deadline, and to be your own boss. If you want to know more about how to break into the freelancing biz… go to another blog! This happened to me pretty much through sheer luck, and because I was diligent in following this particular company’s work. There are lots of great resources to help you get started on your freelancing career. I found this one particularly helpful, and this book put out by Kobold Press was a good read. I am looking to do more work as a freelancer (which is part of why I started this here blog), so in this post I just want to talk about the process, and share a bit of my work.

So, here’s what happened. For a long time, I was following this company that published Pathfinder material (as a 3rd party). I was a fan, and I wanted to keep abreast of their newest releases. One day, on their Facebook page, they make an announcement that they are looking for writers to work on an adventure path.

An adventure path, for those of you who don’t know, is a serial story meant to be used by game-masters in a role-playing game. It was originally popularized by the company Paizo, which publishes Pathfinder. So it’s a bigger, more epic version of an adventure, which includes an outline for a plot, challenges for the players, maps, and a whole lot of “rules stuff” that many GM’s don’t have the time or inclination to come up with themselves.

So I responded to this call, and I was hired almost immediately. The company didn’t ask for a portfolio or a sample of my work, they just told me to write something and have it ready in roughly six months. There was no contract written up until I had almost finished the thing, and no payment up front. Just so you know, this is not quite normal, and if you get hired this way, you should be suspicious. Anyway, I saw it as a great opportunity (which I still think it was), and I was excited to be getting paid to work in tabletop RPG’s. Any further discussion of the fallout on this project, and where it all ended up, should probably be postponed for now. Today we’re talking about what it was like to write the thing.

SO, I sat down to work. The project took me longer than expected, and in some ways, it was probably a good thing that the company was a bit lackadaisical in their approach, because there were a few months in which I mostly just languished in writer’s block. But I got it done on time. Here are some strategies that helped me –

There’s a million other sites and resources out there to help you with the act of writing, and for writing game material. I will close with a little of sample of this project. The adventure path is called Beneath the Midnight Shroud, it’s a creepy, bizarre story that mostly takes place under the ocean (I was writing for a super-niche crowd). One of the coolest parts of D&D type games is the monsters and weird creatures you encounter in the story, and part of my assignment was to design some new ones. So here they are! While I’m at it, I’ll include some magic items. If you play Pathfinder, you might find these useful or at least interesting.

Monsters of the Midnight Shroud

Treasures of the Midnight Shroud